What is a Herniated Disc?

If you're requiring a Torrance herniated disc doctor, we can help. The team at Rolling Hills Medical are industry leaders in comprehensive treatment for all types of disc problems including herniated disc, bulging disc, slipped disc and ruptured disc using nonsurgical and surgical intervention.

A herniated disc is also known as a slipped disc or ruptured disc; it is one of the most common causes of back pain and leg pain. A disc is a type of gel-filled cushion that separates and protects individual spinal vertebrae. Bending, twisting and even walking would be incredibly painful and nearly impossible without healthy discs facilitating movement of the spine.

When one or more discs seep fluid, shrink due to loss of fluid or are no longer centered properly between discs, you may require Torrance herniated disc treatment.

Any type of chronic back pain that fails to respond to traditional treatment should always be evaluated by a Torrance herniated disc doctor. A herniated disc could rupture and require surgery. To diagnose a herniated disc, doctors rely on a patient's description of symptoms and, in some cases, magnetic resonance imaging scans (MRIs) to determine the exact location and condition of a herniated disc.

What is a Bulging Disc?

Bulging discs are discs that have developed a weakened outer "shell" area that allows the disc to bulge out from between vertebrae. Disc tissue composing the exterior of a disc prevents fluid from leaking by distributing pressure evenly.

Aging, wear and tear, mproper lifting techniques or repetitive activities that put constant stress the spine (sitting for extended periods, bad posture or bending over excessively) are common causes of a bulging disc. If you need to see a Torrance bulging disc doctor, we can help!

Bulging discs are not painful until they start compressing nerves or discs are so thin in one area that vertebrae start rubbing against each other. You may not know you have a bulging disc until diagnostic imaging tests reveal the condition. An MRI employs an injectable contrast technique that indicates bulging tissue as lighter in shade compared to normal tissues. If you’re needing bulging disc treatment in Torrance, CA, contact us today!

Initial treatment for bulging discs involves chiropractic adjustments to realign the vertebrae and reposition discs. Massage therapy can be used in conjunction with adjustments to further eliminate pain and restore flexibility to the spine.

What is Degenerative Disc Disease?

Degenerative disc disease is an umbrella term referring to a variety of conditions affecting vertebrae discs. Spinal osteoarthritis is a common degenerative disc disease frequently diagnosed in adults over 55 years old. Back pain that worsens when you sit, nerve compression, bone spurs and numbness and tingling are symptoms of spinal osteoarthritis.

Spinal stenosis is another frequently diagnosed degenerative disc disease. The spinal canal extends from the pelvis to the base of your brain. Narrowing of the spinal canal is seen in older adults and people with osteoarthritis of the spine. Nerves traveling through the spinal canal become compressed and inflamed if the canal starts irritating nerves. Herniated discs and bone spurs often quicken the development of spinal stenosis.

The bursae are fluid-filled sacs that act as cushions, with major bursae located near the largest joints. Bursitis in the knee is also known as goosefoot bursitis or Pes Anserine bursitis. The Pes Anserine bursa, located between the shin and hamstring tendons, often become inflamed due to tight muscles, excessive weight, and arthritis.

Your Torrance bulging disc doctor in Orange County may suggest spinal fusion surgery if your disc degenerative disease is severe and unresponsive to noninvasive treatments. A lumbar spinal fusion procedure "fuses" vertebrae together so they can no longer move and scrape against each other. Removal of one or more discs or bone spurs is often a part of spinal fusion surgery to reduce nerve compression and pain. Fusing vertebrae can also inhibit formation of additional bone spurs.

Degenerative disc disease surgery in Torrance is performed through a small incision made in the abdomen, back or both. Sometimes, your doctor may insert rods and screws temporarily to hold bones in place during the fusion process. An "interbody fusion" surgery involves removing discs and replacing them with a plastic or metal cage or bone graft.

Schedule an Appointment with a Torrance Herniated Disc Doctor Today

Do Herniated Discs Go Away?

Many Symptoms Will Resolve With Time

A herniated disc will not magically "go away," meaning that once the disc is ruptured, it will stay ruptured. On the other hand, the symptoms of the herniated disc could fade on their own with time. With proper self-care measures, the symptoms might improve to the point that people can resume most of their day to day activities.

Some of the important self-care measures include rest, ice, and heat. In addition, over the counter pain medications, such as Motrin, can be helpful. In general, people should give these self-care measures about six to eight weeks to take full effect. During this time, the body will reabsorb the material that herniated through the annulus fibrosis. Once this material is no longer irritating the spinal canal, the symptoms should resolve.

While self-care measures are helpful, there are also some red flag symptoms for which people should seek immediate medical care. People should call their herniated disc doctor right away if they notice a fever, chills, or a rash when the symptoms start. This could indicate that a severe infection is developing.

In addition, any weakness that is gradually getting worse requires the attention of a trained medical professional. This could indicate nerve damage that is progressing.

Finally, anyone who has issues with the bathroom habits, such as their bowels or bladder, needs to seek medical care right away. This could be a sign of a dangerous condition known as cauda equina syndrome.

When Surgery is Required for a Herniated Disc

The decision of whether or not someone should have surgery is a decision that is made as a team between the patient and their herniated disc doctor. If someone needs surgery for a herniated disc, the operation that is typically performed is spinal fusion surgery. In this procedure, the vertebrae above and below the herniated disc are fused together. This will alleviate the symptoms of a herniated disc.

If someone is having trouble carrying out his or her day to day activities, if nerve damage is present, or if over the counter pain medication is not able to keep the symptoms under control, then spine surgery could be required.

Disc protrusion is the first stage of a herniated disc. During this stage, the disc that provides cushions between the vertebrae begins to swell. The back of the disc will start to stick out and protrude from its home between the vertebrae. During this stage, some people might not have any symptoms at all. Other people might start to notice some discomfort. Disc protrusion can be noted on imaging scans if someone does happen to notice symptoms.

The next stage of a herniated disc is a prolapsed disc. During this stage, the disc will stick out further from its natural position between the two vertebrae. The symptoms will start to become more pronounced and individuals might start to notice numbness or tingling. The disc is still sticking out but has not herniated or ruptured yet. The more the disc prolapses from its natural position, the greater the chances of progressing to the next stage.

A disc extrusion is the next stage of a herniated disc. In contrast to a disc protrusion, a disc extrusion has a broader dome shape to it. This means that instead of just extending out from the vertebrae, it also extends either above or the below the natural level of the disc. The liquid material inside of the disc, called the nucleus pulposus, extends beyond its anatomic location. On imaging, it can be hard to tell the difference between a disc protrusion and a disc extrusion. Because of this, many healthcare professionals will simply call this a herniated disc. It is considered a complete herniation.

The last stage of a herniated disc is a sequestered disc. In this stage, a part of the disc itself (or its fragments) actually extends back into the spinal canal. This occurs when the nucleus pulposus completely breaks through its case, termed the annulus fibrosis, and enters the spinal canal. As a result, the fragments of the disc will compress the nerve root and cause the classic symptoms of a herniated disc. This could include numbness, tingling, a loss of certain reflexes, or generalized weakness. A herniated disc can be incredibly painful, particularly when it reaches this stage, as the interior of the disc is actually making contact with the roots of the spinal cord themselves.

Torrance Back Surgery: Help from the Professionals

There are two ways that a herniated disc can be treated. In some cases, the symptoms can be managed conservatively with over the counter pain medication. On the other hand, someone might also require spinal fusion surgery to alleviate their symptoms. At Rolling Hills Medical, our healthcare professionals have been serving the families of Los Angeles and Orange County from the first day we opened our doors. We provide advanced Torrance back surgery and spine surgery to help everyone improve their quality of life. Please call us today at 424-250-8699 to schedule an appointment. We would be honored to serve you.

Dr. Neil Ghodadra is our head of Orthopedic Surgery and one of our Ankle Specialists here at Rolling Hills Medical in Torrance. He has vast experience working with the NFL and other organizations around Los Angeles and Orange County. His background is compromised of training in cartilage restoration of the joint to preserve osteotomy, as well as treatment of other complex conditions.
Meet your new doctor 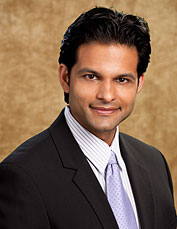